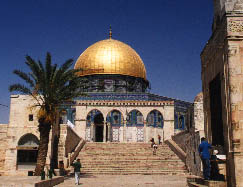 It  is not only Christians who make pilgrimages to the Holy Land. Jerusalem is a focal point for the world’s three major religions. Not far from churches built upon sites where Jesus walked is Temple Mount, the location of Solomon’s First Temple, and today’s Western Wall, or “Wailing Wall”, which is also where you will find the Al Aska mosque and the Dome of the Rock, the third most important Muslim pilgrimage site.

Across the narrow Qidron Valley from the walls of the Old City of Jerusalem is the Mount of Olives, the Garden of Gethsemane and the Chapel of the Ascension, where Jesus is believed to have ascended to Heaven.

Israel is a small nation, and it is possible to drive from the Sea of Galilee in the northeast to the Negev desert in the southwest in less than one day, but in between you will find so many sacred and historical sites that it would take you years to see them all. Some of the most memorable are near the Dead Sea, about a two hour’s drive from Jerusalem. On the way you will pass by the spot where the Biblical “Good Samaritan” encounter took place. Qumran is an archaeological dig where the Dead Sea scrolls were discovered. Not far away, at Masada you can ride a cable car up to the Roman fort captured by Zealots in 66 c.e. and held until 73 c.e. when the besieged defenders chose death at their own hands rather than surrender to the Romans. 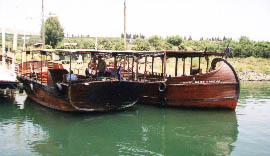 A 2,000 year old wooden boat was discovered on the shores of the Sea of Galilee in 1986, near Midgal (known in the Bible as Magdala, supposed birthplace of Mary Magdalene.) Jesus Himself may have stood on the deck of this ancient vessel. Now preserved, you can see this boat in the Yigal Alon Museum in Ginosar. Nearby is the Mount of Beatitudes, where Jesus gave the Sermon on the Mount, and the ancient village of Capernaum, with a synagogue in which Jesus is believed to have preached. Wooden boats, modeled after the 2,000 year old “Jesus Boat”, take tourists out sailing on the Sea of Galilee (see picture at right) from the ports of Tiberias or Capernaum, and local restaurants specialize in serving loaves and fishes. 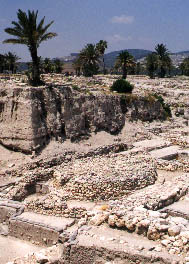 Drive west from Galilee, across the Jordan River (where Jesus was baptized) and you will soon enter the valley of Megiddo, which the Bible calls Armageddon. This is where it is said the final great battle of the world will take place. Tel Megiddo National Park is a fascinating archaeological excavation, on which James Michener based his book The Source. Here you will discover one of the oldest sacred sites on Earth. In the center of the picture at the left is a round, elevated area where there was once an early Jewish temple, but in even more ancient times was probably the site of a pagan altar.

Less than an hour’s drive from Megiddo is Caesarea, a beautiful Roman city on the Mediterranean sea. It was here that the Crusaders landed 900 years ago, on their way to “rescue” Jerusalem. Medieval fortifications can be seen among stonework that dates back to the time of King Herod.