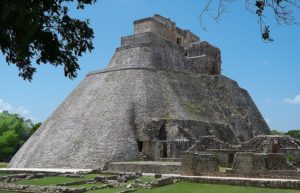 Yucatan is a place of subtle treasures, camouflaged in spectacular ruins and intriguing natural creations. The limestone plateau that supports savannah and dry tropical forests is interlaced with underground waterways. No rivers run on the surface, but beneath are caves and water tubes, like a big Swiss cheese. When the surface of waterways wears thin, it may collapse to form cenotes (circular openings revealing clear water.) While some cenotes are close to ground level, more are at depths of 20 to 50 feet. Roots of trees dangle down, seeking sustenance in the water below, while vines drape gracefully over the rim and swallows nest under rocky eaves.

The feminine element, water, permeates the hard karst formation. The sacred feminine hovers just below the surface of angular stones and linear pyramids in ancient Mayan cities. The Mayalands are considered feminine by indigenous people: Pachamama, Heart of the Earth.

After I had lived in Yucatan for two years, my friend and spiritual sister came to visit. She had traveled before in this area of Mexico, finding it rather harsh energetically and intense climatically. As devotees of the Goddess, we shared interest in experiencing Her presence wherever we traveled. The Yucatan peninsula, to my friend, seemed mostly masculine. Flat plains, rocky fields, hidden waters, and sharply angular ruins projected masculine severity. I invited her on search for the Sacred Feminine in Yucatan.

The Puuc hills rise gently at the western edge of the Yucatan plains. Their curves are soft and rounded, covered with lush foliage. You feel enveloped in the bosom of Mother Earth. Uxmal is the dominant Maya site in the Puuc, with remnants of raised roads (called sacbe) linking to other nearby cities. Founded about 600 CE, Uxmal reached its apex in 800-1000 CE and was largely abandoned a century later. It has some of the finest frescoes and most elaborately decorated buildings in the Maya world.

The overarching sense you get at Uxmal is harmony. It is perhaps the most visually satisfying of sites, with open areas between towering structures set upon tiered platforms. Few trees obstruct the view, and grass brings verdant peacefulness where once white plazas reflected the sunlight. Most striking, however, is the harmonious placement of buildings, how the entire site exudes grace and balance. The elders say Uxmal holds the perfect balance of female and male energies. In Mayan sacred geometry, Uxmal structures are aligned to the sun, the moon, and the reappearance of Venus.

On my first visit to Uxmal, I felt a flutter around my heart as we approached. Sensing my long-ago connections here, intuition told me that the site served as a training center for priestesses and priests of the goddess IxCheel. Several years later, Maya Elder Hunbatz Men described to our group how this place was a university to educate women, especially in the arts of sacred sexuality. Sitting on the steps of the Nunnery Quadrangle, he pointed out the primary symbolism in the frescoes for each cardinal direction: The south building had little huts and grains for earth and family, the east building had the owl of wisdom in the sky grid with nine double-headed serpents of duality, the west building had intertwined serpents of kundalini with a panel of flowers (symbol of the vulva), and the north building had stacked Chak faces (god of rain and life-giving fluids) and male phallic symbols.

Master Maya Teacher Miguel Angel Vergara calls Uxmal “The City of the Kindness of the Moon” and says it was a Cosmic Feminine University for priestess initiations. IxCheel was honored in her many aspects as Lady Rainbow and Mother Earth, with the Face of the Moon, healer, herbalist and midwife.

East of the quadrangle stands the towering Pyramid of the Magician. Visitors entering the ruins are regaled with the sight of this 117-foot high structure, and it takes your breath away. Unlike nearly all Mayan pyramids, which are square and four-sided, this pyramid is oval-shaped. Steep stairs ascend the east and west sides. Facing west, a huge monster mask provides access to the interior through its gaping jaws. Perched atop the mask is a small square temple. The bulging pyramid sides suggest pregnancy, and the oval shape hints of feminine curves. In stark contrast, the straight lines of the stairs are decidedly masculine. During nights of the full moon, priestesses of Uxmal performed their rituals on the heights of the pyramid, merging the creative forces of the universe, honoring fertility and abundance.

Due south of the pyramid, a vast three-tiered terrace rises to support the imposing Governor’s Palace, which is actually a temple of the sun. In front are two remarkable small structures. The double-headed jaguar throne sits on a low square platform, one head on each end facing out. With various friends, I’ve experiences the different energies of the two jaguar heads. One person stands facing each jaguar, hands held palm open toward the jaguar. The smaller head draws energy gently toward itself, as though receiving. The larger head blasts energy out, its power almost overwhelming for some people. Archeologists say the Uxmal ruler used this throne for ceremony. I think it brought his feminine and masculine sides into balance.

Between the jaguar throne and middle steps of the Governor’s Palace stands an elongated stone about eight feet tall. Now tilted about 45 degrees but originally upright, this stone phallus symbolizes the fertilization of earth. Possibly it was empowered to draw down masculine creative forces and focus them in the person of the leader who manifested creative cycles for the people.

Southeast of this broad platform, now surrounded by brushy overgrowth, is the House of the Old Woman. The structure is crumbling, with vines and bushes growing between stones. Few tourists visit here. The old woman is IxMucane, goddess of the center of the earth, the convergence point of planetary energies and place of transformation. Called the Grandmother, she is the legendary sorceress who hatched her dwarf son from an egg, and magically aided him in his contest to overcome the Uxmal ruler. During this process, the dwarf created the imposing Temple of the Magician in one night.

Determined to do ceremony for IxMucane, a friend and I braved the narrow thorny path and found a small clearing in front of the House of the Old Woman. We spread our altar cloth on the ground in typical indigenous manner, and placed objects for earth, water, fire and air at the four corners. Making offerings of copal (resin of the copal tree) and ground maize (corn), we offered prayers and salutations quietly. In our meditation there, we caught glimpses of Uxmal when it functioned as a center where Maya women received both human and cosmic knowledge, learned the ceremonies of the elements and directions, and celebrated the power of creation in song and dance.

My friend was deeply moved and felt the Feminine Divine presence strongly. We agreed that Uxmal offered an amazing balance: sky-earth, sun-moon, masculine-feminine.

An hour from Yucatan’s capital city, Merida, lies hidden the small coastal site Xcambo. My friend and I drove past palm-stippled beaches lining the calm Gulf of Mexico to Telchac Puerto, a sleepy fishing village. A short sandy road took us into the Xcambo ruins, a collection of modest structures. The tallest building, composed of five levels, rises 50 feet. On top, a large flat platform gives unobstructed 360-degree views of the surrounding marshes and the nearby gulf. Palmettos dot the marsh and water birds abound. Around the central plaza are four structures, the southern one presenting masks in deteriorated condition. The architecture is simple, mostly without adornment.

Xcambo is full of stillness and the song of the wind. It brings you in touch with the vastness of seas, the meeting of water and earth. Meditating on the high platform, we easily communed with the goddess of the sea, IxYumHa. She embodies the life of the seawaters, her crown elongating into a sea bird holding a fish. Shells rattle at her wrists and ankles, and seaweed forms her hair. Her special bird is the pelican, and she protects both birds and fish.

We reveled in the gentle feminine energy of Xcambo. Not much is known of this mysterious site, and few tourists visit. In the spring, the local Mayan villagers make a pilgrimage walk to honor the Virgin of Guadalupe with ceremonies on the high platform. A small open-sided Catholic church was appended to the structure long ago. To us, the energies of IxYumHa and Guadalupe merged, as they undoubtedly do on a deep level for the local Maya.

Although the more famous sites of the Mayan Goddess IxCheel are on the Caribbean islands Cozamel and Isla Mujeres, we discovered a strong Sacred Feminine presence in Yucatan. Just as the underground channels hide abundant water, the land and sites here conceal the Goddess; but gladly reveal her energies to those who really look.

Leonide Martin lives in Merida, Yucatan, Mexico where she gives classes and excursions focused on ancient Maya teachings, goddesses and calendars. She received training as a Maya Solar Initiate and Fire Woman, and is an ordained Priestess of Isis. Her book “Dreaming the Maya Fifth Sun: A Novel of Maya Wisdom and the 2012 Shift in Consciousness” reveals how indigenous wisdom supports global transformations. Experiences of the Sacred Feminine through the Maya goddess tradition are offered with Trudy Woodcock at Iluminado Tours: www.iluminado-tours.com