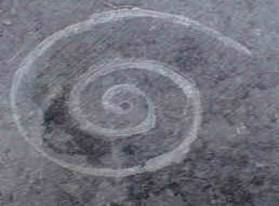 What is 481 million years old and one of the few places on planet earth where you can experience “Original Source Healing” (O.S.H.). It is a little known energy vortex whose time has come to be shared with all the planetary beings.

In the northwestern corner of Vermont on Isle La Motte, the northernmost island of Lake Champlain, is a remarkable natural phenomenon: the Chazy Fossil Reef.

The “Original Source Healing” (O.S.H.) energies located where the Chazy Reef has been exposed on the Isle La Motte is by far the most intense, and yet gentle healing source I have felt in the United States. I have traveled extensively over the last two and half years in all 50 states. During our travels my partner and I have conducted healing ceremonies, in all 50 states, utilizing the energies from the O.S.H. or Energy Vortex’s. Even my travels to India and Africa working with O.S.H. energies could not match the remarkable deep Original Source Healing available on Isle La Motte.

Why does Isle La Motte have such remarkable O.S.H. (Energy Vortex’s)?

I believe it has much do to with the energy signatures left by the billions of life forms making up the exposed 481 million year old Chazy Reef. These condensed energy signatures act as a super conductor of Original Source Healing from our planet and many galaxies beyond.

Why have you not heard Healing Energies at Chazy Reef and the Isle La Motte until now?

There are several reasons, first we need to explore just how this Energy Vortex was formed.

Chazy Reef was formed during the Ordovician Period 481 million years ago in a tropical sea, far to the east on the supercontinent, Gondwana where Zimbabwe is today.

At the end of the Cambrian period, about 488 million years ago, most of the plants and animals living on Earth died, this is probably because of a global climate change or a lack of oxygen in the ocean. Makes you stop and think about what is happening currently to our climate and oceans. This is key to why we are now just learning of the O.S.H. (Energy Vortex’s) at Isle La Motte. This catastrophe marks the beginning of the Ordovician period (first fishes and invertebrates) and the end of the Cambrian period (first evidence of abundant marine life).

This so called “Catastrophe” allowed for the development of what we call “Modern Man.”  It provided the molecular blueprint or soup for the stuff we are made of. As our current climate and ocean’s energy signatures near the same vibration of the Chazy Reef on the Isle La Motte, more and more humans will be attracted to this area.

We will intuitively come to share in offerings and healing at the Chazy Reef and the Isle La Motte. Some will come with intentions for preventing another global die off, others will come for personnel healing. What awaits those whom make the pilgrimage to the Isle of La Motte is direct access to Original Source Healing.

This energy (O.S.H.) is not only planetary based, but provides a direct connection to intergalactic knowledge and experiences. To put it in a more popular term a “Star Gate”.

Isle La Motte is in essence, a massive “Star Gate” where Original Source Healing is now so easily accessible, that most people can feel it as soon as they cross the causeway to the island. As our current climate and ocean’s energy signature move closer to that of Chazy Reef, the flow of O.S.H. and the “Star Gate” connection will grow only stronger. However, there are several preserved areas on the island where the massive O.S.H. flow is so strong and restorative that they natural beckon one to share in offerings and healing with Gaia.

What can you expect when traveling to the Chazy Reef and the Isle La Motte?

It is regarded as a national treasure and was awarded the designation of National Natural Landmark by the Secretary of the US Department of the Interior and the Director of the National Park Service in January, 2009.

The Isle La Motte Preservation Trust owns slightly over 100 acres of the Chazy Reef in two preserves. The Goodsell Ridge Preserve is an 81 acre reef site with a Visitor’s Center/ Museum, interpretive paths, and walking trails. Follow the Main Road on Isle La Motte south to Quarry Road. Turn left. Travel to the T. Turn left again. The Goodsell Ridge will be the first left.

This area is the “Best Location” for experiencing the O.S.H. (Energy Vortex’s) and intergalactic knowledge and experiences.

Due to “Human” activities at this site this area is not nearly as open as the Goodsell Ridge site. We just conducted a “Seventh Fire Offering” at this site which Gaia and our intergalactic family was very appreciative.

Visitors to these sites are asked to respect the rules of these protected sites which include no removal of plants, animals, or rocks from either of the preserves. Fossil collecting is strictly forbidden. These are places for quiet walking, ceremony and meditation, but not for vehicular traffic, bicycles, or other activities which may damage the fragile ecosystem and geological formations of the preserves.

Those whom choose to make the pilgrimage to this sacred site can find an excellent guide to the Isle and a wonderful retreat center. Dr. Jeanette O’Conor and the Maya Retreat Center (Bed & Breakfast) are located with-in a few minutes of both sites on the Isle. Dr. O’Conor offers individual and group experiences at the sites and the Maya Center provides overnight lodging. For those whom wish to collect a 481 million year old healing rock, the Maya Centers shore line offers an opportunity to discovery such treasures.

If not now: when? If not here: where?

Dr. Ronald Landau RN, MS, CH, ND
Dr. Ron has over 40 year of experience as a holistic practitioner (Naturopathic Physician & Nurse Practitioner). He is a medical intuitive and auric visionary. He has traveled in all 50 states, India and Africa where he has shared in scared ceremony and healing rituals.