Predating the Egyptian pyramids and Stonehenge, Maltese temples are the oldest freestanding structures on Earth 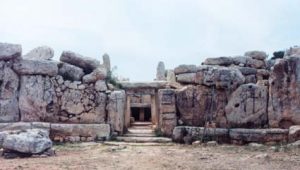 The tiny Maltese islands, located just south of Sicily, are home to the oldest megalithic freestanding stone structures that exist on Earth today. These intriguing structures, many of which resemble the shape of a woman’s body, predate the Egyptian pyramids and Stonehenge. One famous artifact found in these ancient sacred sites, the Sleeping Lady, is thought to be representative of the Goddess religion practiced on the islands. Discovered in the underground, labyrinth-like structure called the Hypogeum, the Sleeping Lady is as much of an enigma as the location in which she was found.

Because of amateur and shoddy archaeological practices being employed at the time the Sleeping Lady was found, definitive scientific evidence is lacking about the exact nature and purpose of both The Sleeping Lady and the Hypogeum, but many theories abound. Having visited several of these woman-shaped temples, as well as the underground Hypogeum, I can personally attest to the sacred energetic that still exists among the ancient stone structures which seem to activate an intuitive remembering. This is particularly true within the womb-like Hypogeum, built in the fourth millennia and composed of three underground stories. One is flooded with emotions being within this incredible holy site, particularly when the ethereal echoes of sound begins to reverberate within the space. While some believe the Hypogeum was used as a tomb or to practice the chthonic mysteries of Goddess, the suggestion of the pose of the Sleeping Lady leads many to believe this was a sacred place used for the ancient healing art of dream incubation. This was an early healing modality where the divine would intercede and lend guidance or inspiration while the subject was asleep.

The Sleeping Lady of Malta found within the Hypogeum was hardly the only example of mortal and divine interaction. That inner voice, that divine guidance, those whispers that inspire us to act or create, entered the psyche of our ancestors in various ways. In ancient times these messages arrived in a dream, a disembodied voice or in a vision. In the Old and New Testament, these dreams of divine self-disclosure were called visions of the night. Physical appearances or manifestations of a deity were events of theophany or an epiphany. Ideas of divine guidance or revelation might also be called epiphanies. In writing to their congregations, we have evidence of apostles who have had visions of Goddess while they were awake. In Greece, Asklepios and Hygeia, God and Goddess of Healing, were seen in visionary dreams by those who came to healing temples for treatment using the aforementioned ancient healing art of dream incubations. After fasting and purification rites, the sick would sleep in the temple overnight in hope of receiving divine guidance to cure what ailed them. Dream incubation was also practiced in sacred temples by the Chinese. Native Americans went on dream quests where they would go out into the wilderness, fast and pray as a rite of passage, and in doing so, hopefully receive divine guidance. The ancient Egyptians also believed through the power of dreams they might receive messages from their many gods and goddesses.

The Dreamtime is an integral component of the culture of the Australian Aboriginal tribes who believe the connection between the physical world and spiritual consciousness is reached during dreaming. These dreams shed light on the inner landscape of themselves, as well as inform about ancestors, history, fate, and culture in the past, present and future, simultaneously.

With the onset of science, and our disconnection with Nature, less and less faith and belief has been put in such methods. Today, occurrences of divine dreams and visions might be seen as unimportant and silly. They could be viewed as flights of fancy, neurosis, hallucinations or wish-fulfilling. And with some patriarchal religions rarely encouraging this personally empowered direct link to the divine source, or the divine knowledge of gnosis, such methods might at best be discouraged and doubted, or at worst, feared and interpreted as evil. It has been well documented what obstacles must be overcome before an apparition is accepted as real by the Vatican.

Could it be too many of us have stopped believing in dreams and visions? Perhaps we may have consequently severed or weakened that vital link to our God/dess Self or that gnosis that lies buried within. Many people do not attempt to remember their dreams or give any credence to these glimpses we are given. Could we have gotten too sophisticated and “big for our britches?” Might our ancestors, in a simpler time, have been more in touch with the Divine?

In more contemporary times, The Sleeping Prophet, Edgar Cayce, was famous the world over for his dream interpretations. He once said, “Dreams, visions, impressions, to the entity in the normal sleeping state are the presentations of the experiences necessary for the development, if the entity would apply them in the physical life. These may be taken as warnings, as advice, as conditions to be met, conditions to be viewed in a way and manner as lessons, as truths, as they are presented in the various ways and manners.” Cayce believed the information he received in these dreams was from two sources: the subconscious mind of the individual for whom he was giving a reading and the etheric source of information called the Akashic Records, a sort of universal database for every thought, word, or deed that has transpired in the past, present and future.

On the other hand, Sigmund Freud theorized that dreams were a reflection of human desires and were prompted by external stimuli. He and Carl Jung believed dreams were the interaction between the unconscious and the conscious. Psychologist Joe Griffin believed dreams were metaphorical translations of waking expectations not acted upon during the day to quell their arousal. He believed dreaming deactivated the emotional arousal, freeing the brain to be fresh each day. Sort of like cleaning one’s palate between taste tests. Carl Sagan considered dreams neurological waste products with little subjective significance or meaning, however he believed REM sleep serves an important survival function in that being deprived of this state more than five days can cause hallucinations. Many psychologists believe dreams can help humans understand their subconscious thought processes in an attempt to overcome psychological difficulties. Contemporary researchers in the fields of dreamwork and parapsychology are once again using dream incubation techniques as they revive the ancient healing practice.

There is no definitive answer on dreams, whether they might be divinely inspired or not, if they can aid in predicting the future or healing the sick, or if they give insight into our own psyches, or provide a direct connection to the Source. Perhaps the best approach is not to question too critically the source of creativity, inspiration, vision and imagination, or any safe means that allows for personal growth and illumination. We can look to dreams for insight and contemplate the messages yet never relinquish our free will to make our own decisions without turning off the flow from the spigot. Good advice comes from Carol Koleman when writing about Yhi, Goddess of Light and Creation. She states, “To bring life to the myriad of future creations waiting within, we must first acknowledge their absolute existence and believe that we can make them emerge through our own efforts. Remember there is magical possibility in every crevice of the cave! It only waits for our light to release it. If we ponder the gifts of our ancestors and honor the blessings we have now, the internal and external landscape of our world will be lush with life.”

A prolific writer, published author, and tour organizer, Karen’s most recent work blends her experiences of women-centered multiculturalism evident in archaeology, anthropology and mythology with her unique literary talents and travel experience throughout the world to pen Sacred Places of Goddess: 108 Destinations

Her published articles have appeared in both domestic and international publications since 1995. She is currently a contributing writer to Sacred History Magazine. Sacred tours she has led and organized have itineraries that circle the globe and through A Special Journey Travel, she continues bringing the like-minded to sacred sites to experience the joy of purposeful travel. Karen Tate’s website is www.karentate.com

Karen will be conducting a Sacred Feminine tour of Turkey October 15 – 28, 2008. For more details about this “Sacred Sites of the Goddess” tour, visit www.karentate.com.

Watch a video about ancient Goddess sites on Malta