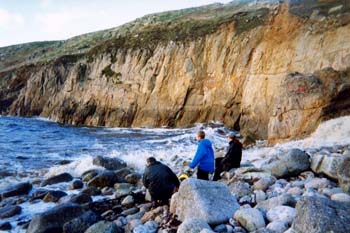 The extreme tip of south-west England, where the cliff falls into the Atlantic Ocean, is known as Land’s End. This small rocky outcrop has become a commercial tourist attraction with fast food and amusements catering for busloads of visitors daily. But come with me, let us take the road less traveled and follow the footpath south along the dramatic cliff tops. It’s exhilarating, high above the ocean waves with the wind in our hair, we seem to fly like the gulls that wheel overhead. We soon round the headland and find ourselves in a different world, the world of nature – and magic.

Nanjizal Bay is quiet and deserted as you would expect for a place accessible only on foot. Here lies real treasure. Emerging from the crashing waves the Mary and Michael earth energy currents sweep across the rock strewn beach at the start of their journey traversing England. They will snake their way either side of the St. Michael leyline just as the serpents coil around the sword of the Caduceus. For three hundred and fifty miles they will follow the path of the rising sun at Beltane, empowering many remarkable sacred sites on route. (For a detailed description see The Sun & the Serpent by Hamish Miller & Paul Broadhurst.) I first experienced these lively energies further down the line at Glastonbury and Avebury but it’s exciting to be at Nanjizal because this is a place of beginnings; the beginning of the land, the beginning of the line and the beginning of a special journey for me.

It was a blustery but sunny February morning. Walking to the rocky promontory where the energy currents are supposed to first come ashore I was surprised and disappointed to find that I couldn’t detect anything. This was confusing, why had I felt so strongly that I should visit this site today? “Maybe it wasn’t guidance at all but my mind trying to create an adventure,” I thought.

Walking back across the bay, over its white sand strewn with thousands of stones and boulders worn smooth by the ceaseless pounding of the Atlantic rollers, I saw a very odd sight. My attention had been drawn to one rock that was the size of a loaf of bread. It stood out because, alone amongst all the other stones, it was jagged. Picking it up I was surprised to see it was pure quartz. Then, turning it in my hands, I was overcome with awe. The crystal rock was the shape and size of a ram’s head. The large inwardly curling horns were formed by massive clusters of clear quartz points and the ram’s eyes were formed by inset little caves of tiny quartz points, all set on the head of milky quartz. Its face was bloodied by a streak of red ore, set within the rock, which ran down the ridge from the brow to its nose. It was the most remarkable thing I had ever seen.

At the time I was training in crystal healing and it occurred to me that I had been led here to receive this gift for my healing room. I turned to leave the beach but had gone no more than three paces when I was stopped in my tracks by a blinding pain across my brow. When I turned towards the ocean the pain disappeared. Three times I tried to leave the beach and each time the pain appeared. The message was clear. “Okay” I said, “so I’m not to take you away from here. Please tell me what I’m to do.” I sat and cleared my mind and held the ram’s head crystal. After a while I intuitively “knew” there was a cave on the beach and that I was to take the crystal into the cave.

I found the cave nestled into the cliff face to one side of the beach close to the sea line. It was a cleft in the granite cliffs maybe thirty feet deep and fifteen feet high. As I wandered around feeling the smooth cold walls that were running with water from the fissured roof, my eyes began to acclimatize. The only irregular feature in the cave was a low shelf that stuck out from the wall on the right. Moving over to it I saw that the whole of this shelf consisted of thousands of crystal points. All other surfaces in the cave were smooth granite as were all the rocks on the beach. Then I saw that at the back of the shelf was a recess as though a part of the rock was missing. I instinctively offered up the crystal ram’s head into this recess and it fitted in like a piece of a jigsaw.

I sat on the shelf and the hairs on the back of my neck bristled as I recognized the presence of magic in that moment. I had come here in search of Michael and Mary and they had shown up in the most unexpected way. I was to learn throughout my journey that dramatic entrances are a hallmark of Michael’s — no wonder he is associated in legend with that most dramatic of creatures, the dragon. I recognized that an important moment in my life had arrived. I had started on a journey of discovery and healing and this was the point of no return. Did I commit wholeheartedly to this unknown path wherever it may lead me or did I want out and go home? My response was an instinctive reply from my soul — I commit! The water from the wall running down my neck and spine was a form of baptism. I didn’t know it at the time but this was the start of a seven-year apprenticeship under the tutelage of St. Michael.  I walked out of that cave a different man. I later discovered that in the Celtic tradition a ram symbolizes rebirth and new beginnings.

I didn’t know if I had done my ceremony that day solely for me or if I had somehow performed a healing for the Earth as well. If the latter were true then I wanted to ensure that the crystal remained and the healing effect was maintained. So six months later I returned to Nanjizal Bay and the cave to check that the crystal was still there. When I looked into the cave I laughed and thought, “Oh ye of little faith!” The calming of the seas in summer had deposited hundreds of tons of sand onto the floor of the cave and the ram’s head and the crystal shelf were safely buried six feet below my feet.

Glenn found himself drawn magnetically to sacred sites around the world. This attraction was so strong that he felt compelled to investigate them both experientially and theoretically. This journey, now in its fourteenth year, has become all-encompassing, being the vehicle through which he has learned about the world (seen and unseen) and even developed his sense of spirituality. He is a qualified teacher, crystal healer and spiritual healer and has facilitated groups on personal development and earth mysteries for many years.

Through Sacred Britain Tours, Glenn and his wife Cameron have led hundreds of people on journeys of discovery to England’s sacred sites. They also run an annual crop circle conference in Vermont in the fall. Glenn has given presentations in England, Egypt, Canada and the United States and has also appeared on television and radio shows talking about both sacred sites and crop circles.

Glenn, who is English and Cameron who is American, split their time on either side of the Atlantic.