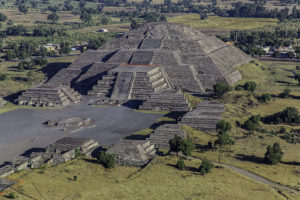 Thousands of ancient footsteps pound on the stones which lead all the way up the Temple of the Sun. Taught bronze bodies glisten in the afternoon light; their breathing comes in low rumbling gasps as they ascend higher, where the air is thin and the stairs below become increasingly steep. Once at the top, their eyes reach across the land to watch over their sacred home; the lush green fields, the Temple of the Sun and of the Moon, and the ceremonial platforms connected like freckles by a stretch of road called ‘The Avenue of the Dead.’ And then comes the whistling of their handmade instruments; carried over the site by a crisp wind. This is the feeling of Teotihuacan.

I find it no small wonder that Teotihuacan is one of the most visited archeological sites in Mexico. Located approximately twenty five miles northeast of Mexico City, it is easily accessible by bus from Mexico City and also most regions in central Mexico, including Monterrey, San Miguel de Allende and Leon. Personally, I traveled three and a half hours from San Miguel de Allende by bus, which is a pleasant, flat ride through vast desert land peppered with the largest Aloe and Cacti plants I have ever seen.

On the ride to Teotihuacan, my tour guide told me a bit about the site, starting with the mysterious nature of its former inhabitants.

“It has been agreed,” He said, “that Teotihuacan contained many different ethnic peoples. The Totonec, the Zapotec and then the Maya, and then lastly, the Aztecs.”

This was actually news to me, since I always thought of Teotihuacan as an Aztec site. Indeed they were the last inhabitants before Hernan Cortez traveled to Mexico in the hopes of expanding the Spanish Empire, and ended their entire civilization in 1521. My tour guide went on to say a few things about the Aztecs, including what is most widely known about them; the act of human sacrifice. When Cortez first landed in Mexico, the Aztecs mistook him for a God and so decided to perform their ritual sacrifices to make him happy. This included decapitation, bludgeoning and most famously, cutting out a still-beating heart. Cortez was appalled by this display, but at the time it was common practice for the Aztecs in honor of their Rain God and Feathered Serpent God.

Nowadays the Rain God and Feathered Serpent God are honored in such practices as carving shot glasses in their image, which can be found at the resident Teotihuacan tourist trap on the way into the site. It is the first place you will enter and it is filled with many cozy shops offering crystal pyramid paper weights, mock sacrificial knives and other obsidian trinkets, reminiscent of Aztec tools.

In place of these stands, in the time of the ancient civilizations, there stood a great market. I found that the modern market contains the resonance of the previous one; the look of ancient times coupled with modern merchandise. In fact I venture to say that the entire journey through Teotihuacan felt like a journey back and forth through time; a place where two eras exist simultaneously in the same space. The native peoples have been replaced by khaki-sporting tourists and locals and the indigenous music is now played by craftsmen selling their work on the sides of the Avenue of the Dead. I walked on this road with my sneakers when in the 1500s only bare feet and simple shoes touched the ground. I looked to the temples as I was told their story, when so many years ago they were living it. And finally, huffing and puffing, I reached the top of the Pyramid of the Sun, and looked out to the altars, the Avenue of the Dead and the green paradise around me with the same adoration I know the ancient peoples did.

As it began to rain, I followed my group into the Museum of Teotihuacan. Inside, a string of exhibits and short scripts line the walls, telling stories of the Aztecs’ inconceivable advances in astronomy, medicine and mathematics. (Interesting to note that the meticulous grid of Teotihuacan is aligned to precisely 15.5 degrees northeast) I learned that Teotihuacan translates to ‘birthplace of the Gods.’ During the first millennium CE, Teotihuacan was one of the largest cities in the world and the largest city in the pre-Columbian Americas. The influence of Teotihuacan was wide-reaching, as evidenced by the similar architecture found in other areas of Mexico which is believed to be modeled after the great site.

Obsidian was used to make tools and all sorts of other artifacts; some of which are now poised proudly behind glass cases. I was struck by the artistic precision of these artifacts including the pottery and masks. Every contour has a purpose; no line out of place. Anyone who took pottery in high school will know first-hand the difficulty of spinning a simple bowl, let alone such perfectly constructed items as these. Finally I read about the fall of Teotihuacan; the environmental issues and malnutrition, and my tour guide told me about how, later on, Cortez was able to conquer the Aztec civilization in three months.

When I finished reading up on the archeological and anthropological facts about Teotihuacan, I thought about the almost absurd placement of this museum. I have never been to one which is placed directly in the center of the actual site it was created for. I have stood in the Egyptian wing at the Metropolitan Museum of Art in New York City, my hands hovering inches away from an altar, trying to feel the energy of those who used it. I have looked up at a huge Tyrannosaurus Rex in the Museum of Natural History, wondering how fast it could run and how I would feel if I suddenly stumbled into Jurassic Park. And I have frequented the Hayden Planetarium, gazing up at the dark silky imitation sky, my arms spread out like a bird thinking about zero-gravity and what would be the most out-of-this-world view ever. In this way the museum of Teotihuacan is no different than those experiences; it pales in comparison to the real thing.

I found that once I stepped outside of the museum’s doors I was teleported back into the past and no modern educational exhibit could possibly duplicate the sense of what surrounded me. No hovering hands necessary to feel the energy here. Once again I traveled down the Avenue of the Dead, past the altars and fields, all the while looking up to the tops of the pyramids and listening to the music of a time long since past. This is what I will remember most about my Teotihuacan experience; the resonance of the native people in the stones, the wind, the rain and the sky. It is the feeling that these voices will always echo beyond the boundaries of time.

Merridith Allen is a writer living in New York City. She is currently enrolled in the Low-Residency Creative Writing Program at the University of New Orleans, which brought her to Mexico in the summer of 2008 to write, learn and explore the Mexican landscape. Merridith.Allen83@gmail.com