Glastonbury, in Southwest England’s county of Somerset, was once known as the Isle of Avalon. The place has been sacred long before the dawn of recorded history. Ancient Celtic religious leaders performed rituals here, and legends tell of tunnels leading into the realm of the elves and fairies. Glastonbury is also associated with Jesus, King Arthur and UFOs.

Dominating the skyline is Glastonbury Tor, a 170 meter (550 ft.) hill. Some say it was man made, an engineering accomplishment to rival the great pyramid of Egypt. Certainly it was sculpted by human hands — a labyrinth pattern was cut into the hillside during the Neolithic era.

On top of the Tor is St. Michael’s Tower all that remains of a church built in the 14th century and restored in 1804. There have been several reports of mysterious lights seen above the Tor. A local policeman saw “eight egg-shaped objects … hovering in formation over the hill” and another observer reported “several green and mauve lights hovering around the tower.” Martin Gray says he slept in the tower one night, during which he saw “the interior of the tower radiantly aglow with a luminous white light.”

A Christian legend says that, when he was a child, Jesus visited Glastonbury with his uncle, Joseph of Arimathea. Lyrics to the hymn O Jerusalem, by William Blake, echo the story: “And did those feet in ancient time walk upon England’s pastures green…” It is also said that Joseph returned to Glastonbury with the Apostle Philip in 37 c.e. Joseph supposedly leaned on his walking stick, which took root on Wirrall Hill and grew into a thorn tree, which bloomed every Christmas until Puritans chopped it down in the17th century. Joseph and Philip are credited with building the first Christian church in England, on the site where the abbey was later constructed.

An abbey has existed since at least the 5th century c.e. The most recent, built in the 13th century, was destroyed in 1539, on orders from Henry VIII. The previous abbey was destroyed by fire in 1190, and during the clean-up, two ancient coffins were discovered, which were believed to contain the remains of King Arthur and Queen Guinevere. A lead cross in one of the oak coffins was inscribed, “Here lies the famous King Arthur in the Isle of Avalon.” 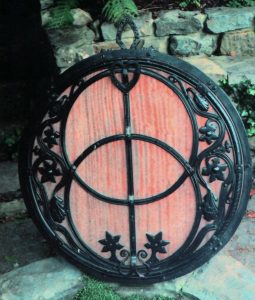 Chalice Well is so named because Joseph of Arimathea is said to have hidden the chalice of the Last Supper, the Holy Grail, in the water, which flows from a natural spring. Miraculous cures have been credited to the healing waters of the well. The design motif on the well is the vesica piscis, an ancient, pre-Christian symbol, which evolved into the Christian fish. It represents the blending of masculine and feminine, the yin and yang, and the meeting-place of the conscious and unconscious.

Glastonbury has been a sacred place for more than 5,000 years, since Britons first worshipped the Great Goddess. About 300 BCE, the Tor was known as Ynis Witrin, or Isle of Glass. The name Avalon derives from Avallah, a Celtic god of the underworld. There is an ancient legend about a glass mountain where fairies dwell. Could Glastonbury Tor be the same place?

In the book Sacred Britain: A Guide to the Sacred Sites and Pilgrim Routes of England, Scotland and Wales

, Martin Gray and Nigel Palmer write that in Glastonbury, “you can find the highest concentration of religious nonsense and spiritual tat in Britain. But you can also find people who are working to make sense of an insensitive world, who find here a place of great spiritual power and who have helped us rediscover the sacredness of this landscape.” Martin Gray says, “Glastonbury is a power place of potent transformational energies.”