I was walking through a grove of eucalyptus and ironwood trees when I suddenly saw the object of my search — an  enormous stone penis. The sign at the trailhead had said that Kaule O Nanahoa, also known as Phallic Rock, was “a natural formation associated with Hawaiian legend.” But the six-foot-tall lingam had likely been enhanced by a human sculptor. And it was not simply an historic curiosity. The flowers, coins, seashells and other offerings left on nearby stones showed that people still believed in the power of this place.

Located in Palaau State Park, at the northern shore of the island of Molokai, Phallic Rock is unquestionably the most powerful of the nine sacred sites I recently visited on Molokai and nearby Maui. At an elevation of about 1600 feet, this part of the island felt strangely cool and cloudy compared to the sunny pineapple fields and beaches just a few minutes drive to the south. It’s an easy uphill walk of only about five minutes from a parking lot, where there are sign-posts pointing left to Phallic Rock and right to a viewpoint overlooking the Kalaupapa Peninsula, where Father Damien established a center to treat leprosy patients. 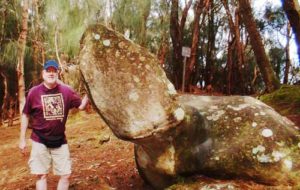 Phallic Rock stands above a circle of boulders, and all the dark stones are mottled with patches of light-colored lichen that reminded me of barnacles on the skin of a whale.

As I stood, breathing in the atmosphere of this strange place, I began to feel a tingling sensation that told me this was an area of high energy. Gradually it dawned on me that Kaule O Nanahoa was similar to the Intihuatana stone at Machu Picchu in Peru. Both were vertical outcroppings of bedrock at the top of a high promontory. Both had been utilized by ancient shamans or holy people for spiritual purposes. In my mind I visualized the phallic rock pulling in energy from the heavens and directing it down to the stone circle nearby, just as the Intihuatana — the “hitching post of the sun” — is said to draw energy from the surrounding apus or spirits dwelling in the mountain tops surrounding the ancient Inca city. 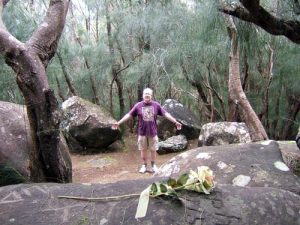 Nanahoa is the name of the Hawaiian fertility god, and Kaule O Nanahoa translates as “the penis of Nanahoa.” According to legend, women who were unable to become pregnant would come here, spend the night below the stone, and their infertility would be cured. Amazingly, while I was at the site, I spoke with a woman who had a healing experience of a different kind. She had recently endured a long and difficult chemotherapy program which left her deaf in one ear. With tears in her eyes, she told me that, after spending some time at Phallic Rock, she had been able to hear her husband’s heart beating with her deaf ear.

The more I thought about it, the more it made sense. Dozens of cultures believe there is an energy flowing through our bodies that can be strengthened and re-directed to give us better health. This is the premise on which such modalities as yoga, Qigong and Reiki are based. Just as microwave energy can cook food, or the invisible energy in a magnet can move iron particles, there are places on Earth where there is an abundance of energy that can have a beneficial effect on the human body. Hopi elders refer to these sacred places as the “spots on the fawn,” that enhance creativity or promote healing. For centuries, Kaule O Nanahoa has been recognized as one of those places.

On my last day on Molokai, I happened to strike up a conversation with a native man at the airport. I mentioned Phallic Rock, and told him I felt it was a very powerful place. He agreed, adding that the grove of ironwood and eucalyptus trees that surrounded the rock had only been planted a few decades ago. Until then, he said, the hilltop had been open and unobstructed, and Kaule O Nanahoa could be seen from a long distance away. He also told me there is a lesser-known female stone a short distance down the slope that was named after Nanahoa’s wife, the goddess Kawahuna. It is said that as long as the female stone remains nearby, Nanahoa will remain erect.

Search for Hotels in Molokai