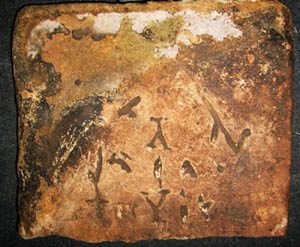 One of the stone tablets which were inscribed with the Ten Commandments may have been found in the center of England, according to a new book, The Templars and the Ark of the Covenant: The Discovery of the Treasure of Solomon

According to the Bible, the Ten Commandments were inscribed on two stone tablets that were given to Moses by God on top of Mount Sinai. They were believed to have been written by God himself with the laws for the Israelites to follow. A special container was then made to carry them. This was the Ark of the Covenant, a fabulous golden chest that was later kept in Solomon’s Temple in Jerusalem until it disappeared from history following the Babylonian invasion of the city in 597 BCE.

“Biblical scholars, archaeologists and adventurers alike have spent years searching for the last resting place of the Ark,” says Phillips, “but until now its secret hiding place has remained one of history’s most enduring mysteries.”

Phillips, who has written other books concerning ancient mysteries, such as King Arthur and the Holy Grail, says that Ark was discovered in a cave near the ruins of the ancient city of Petra in southern Jordan by the crusaders, the Knights Templars, in the twelfth century. He also claims to have found evidence to suggest that it was later brought back to England when the crusaders were defeated by the Saracens.

“These Knights Templars came from Temple Herdewyke in the English county of Warwickshire,” says Phillips. “Just before their descendants were wiped out by the Black Death in the fourteenth century, they left a series of strange paintings on the walls of a church in nearby Burton Dassett which seem to have held clues to where they hid what they claimed to be the Ark.”

With two friends from America, Graham Russell, himself famous for being in the rock band Air Supply, and his wife, Hollywood actress Jodi, Graham Phillips traced what he believes was the location revealed in these paintings to an old holy well beside the road in the English village of Napton-on-the-Hill in Warwickshire.

“We have not yet managed to find the Ark, says Phillips, but we did discover a strangely inscribed stone slab which may have been one of the tablets it contained. It was found by Jodi, buried in the banks of a nearby stream. We think that it got there when the area around the well was dug up to make way for a new road in the 1940s.”

About an inch thick, a foot and a half long, and a foot wide, the sandstone slab is inscribed with what appear to be thirteen separate symbols, cut into the stone to a depth of about a quarter of an inch. It is at present being examined by experts in the USA. So far the symbols have defied translation and its age is difficult to determine. Nevertheless, it is made from a form of sandstone that comes from the mountain that Phillips identifies as Mount Sinai. “This is where the Ten Commandments are said to have been made,” says Phillips. “I don’t know whether they were actually made by God or not, but if I am right then this tablet could have been one of those that Moses brought down from the sacred mountain.”

What if the Holy Grail was not the cup from which Jesus drank at the Last Supper, but rather is a small alabaster container that Mary Magdalene used to capture drops of Jesus’ blood during the Crucifixion? That is the premise of Phillips’ book, The Chalice of Magdalene: The Search for the Cup That Held the Blood of Christ.

The popular Arthurian stories of the Middle Ages depict the Holy Grail as Christ’s cup from the Last Supper, which was believed to have been endowed with miraculous healing powers and the ability to give eternal life to whoever drank from it. A much earlier tradition, however, claimed the Grail was the vessel used by Mary Magdalene to collect Christ’s blood when he appeared to her after rising from the tomb. While many vessels were claimed to have been the true Grail, there was only one thought to have been the chalice used by Mary. From Jesus’ empty tomb, where it remained for almost 400 years, this holy relic known as the Marian Chalice was taken to Rome by the mother of the first Christian emperor, Constantine the Great. It was then smuggled from Rome in 410 A.D., according to the fifth-century historian Olympiodorus, to save it from the barbarians who sacked the city. Well into the Middle Ages legend persisted that it had been taken to safety in Britain, the last outpost of Roman civilization in Western Europe.

Other books by Graham Phillips include

, Atlantis and the Ten Plagues of Egypt: The Secret History Hidden in the Valley of the Kings

, and The Marian Conspiracy: The Hidden Truth About the Holy Grail, the Real Father of Christ and the Tomb of the Virgin Mary